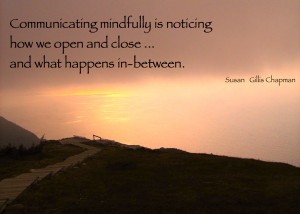 Last week around 45 people celebrated New Year’s in a silent winter retreat in the heart of downtown San Francisco.  Along with plenty of sitting meditation, we were exploring what happens when we make a commitment , like quitting smoking or drinking or spending more time in conversation with our partner rather than in front of a screen.  Supporting this commitment, we can apply the skills of mindful communication, even if our resolution doesn’t seem to be related. Here are three ways to do this, using Tanya as an example.

Step One: See the Red Light        Tanya decided to quit the habit of mindlessly eating at night while absorbed in her favorite TV series. So her first step is to identify that pattern as red light.  “ I ended up having a conversation with myself, listening to two sides of the argument.  One side was like a parent saying “ this isn’t good for you, you should stop”.  The other voice was like a rebellious child, wanting a reward at the end of the day.  I realized that these two voices were locking me into the ‘heartless mind/ mindless heart’ cycle, and my resolution would be doomed if I took one side or the other”.

This was Tanya’s first success in working with her resolution. By listening to herself and recognizing that the red light pattern went deeper than merely eating mindlessly, a horizon of new options opened up.

Step Two: Explore the scary feelings of the Yellow Light      Tanya turned her attention to the background issues that fed her ‘scolding- reward’ cycle.  She looked at the way she spent all day postponing rest and relaxation for that special binge in front of the TV, the way people who hate their jobs hang in there for a week in Hawaii.  The fantasy of reward was a way of staying mindless during the day, ignoring other opportunities to relax.  She realized how much she used fantasy to cope with the everyday disappointments and uncertainties that she didn’t want to relate to.

By turning inward and making a relationship with the “yellow light”, the background anxiety and self-doubts that she normally ignored, Tanya’s inner journey began.  Now, at last, she had a chance to discover and even make friends with the fears that she’s been running from.

Behind negative habits is a background anxiety that we normally keep frozen and out of sight. This ‘yellow light’ experience is like a bully. It scares us into thinking that we can’t handle the facts of life: the fact that everything is always changing, that nothing is certain, that our life and our identity is much more fragile than we think.  At some point in our history we turned away from this reality out of fear and tried to replace it with something predictable—like a fantasy of ice cream and a reliable TV show.

Tanya found that working with her yellow light experiences was essential to keeping her resolution.

Step Three:  Green Light     By choosing to come to a meditation retreat over the New Year’s holiday, Tanya invited a fresh approach to mking resolutions. Instead of setting herself up for failure, she experienced moments of relaxation and openness, ‘flashes of the green light’, in small ways throughout the day.  “ To me, this is freedom. Stepping off the carousal of scolding and rebelling, moving past the sense of shame and failure, I’m noticing how easy it is to simply pop the bubble I call ‘reward fantasy’ and come back to the present moment. After all, it’s only a thought. And the present moment has lots of rewards built into it that I never noticed before… the smile from a stranger, the amazing shade of red on the Amaryllis flower.”

Instead of denying herself something she thought she needed, Tanya began to interpret her resolution as something positive:  I’m going to reward myself by going for a walk, taking a yoga class, dropping in for a noon-time meditation.  By making friends with the present moment, her evenings changed from being a cocoon of mindlessness to an open ended chance for new possibilities. “ I notice that I don’t eat when I read. So I’m doing more of that.”

Sharing the New Year’s retreat with Tanya and talking with her a week later, I get the sense that this year something has shifted for her.  Waking up to whatever is going on the present moment has incredible power to cut through harmful habits, which depend so much on escaping nowness.  Let’s give Tanya the last word on this: “ This year my resolution started off with one small habit, but I’m finding it’s grown to include something positive:  I’m determined to live my life rather than postponing it for a cloud of mindlessness that I don’t even notice. So here I am, no matter what, and this feels very good.”