Sometimes it’s easier it is to see the qualities in a rock than to find anything interesting in another person.  From a distance, most people are easy to admire.  And our inner circle of friends and family can be endlessly fascinating. But sitting in a stuffy office listening to a co-worker go on and on pushing a meaningless platform of opinions with no regard for what you think– that can be a challenge.  Toxic certainty is like a concrete wall with no windows or doors.  Meaningless, like a politician or an advertising campaign.

The photo below is a spirit rock that sits on the path up Gampo Lhatse, the sacred protecter mountain behind Gampo Abbey.  Maybe it’s powerful presence is partly due to it’s location– a place of silence and contemplation.  Location might be the key.  Take that loud-mouthed colleague and place him in a ‘green zone’, a space surrounded by deep listening and gentle attention and see what happens.   Location isn’t only physical– though a natural setting helps.  More important is simply locating someone’s spirit– catching him or her with the gps beacon of your tender heart, open mind, awake body.  Once a genuine connection is made, even for an instant, something shifts.  Like watching an ordinary rock manifest as a sacred tortoise.  Miracles happen. 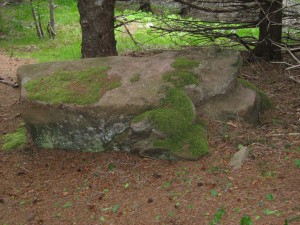 Mindfulness meditation makes us more aware of the inner conversations– those dramas that run over and over again in our minds.  We recruit people to play certain roles in these inner conversations, but when we look closely we realize they are dream-masks.  They aren’t real people.   Our inner conversations are just thoughts spinning in thin air.  But listen carefully, and we find that these internal dialogues are pretty close to 100% negative.  Why?  Because the frozen dramas that run through our mind are trying to manage fear.  Here are a few examples:

With mindfulness practice we discover that we spend more time listening to our thoughts and inner conversations than we do in the real world.  So our intention is to turn that around and interrupt these imaginary dramas, giving ourselves a breath of fresh air and a reality check.   Coming back to nowness is giving ourselves a break, reconnecting with who we really are:  awake, tender and open.   And in the process, the people in our lives get to be who they really are as well, unmasked from the roles we project on them. 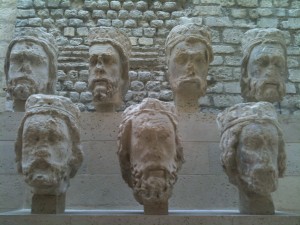 Carman was looking forward to seeing her high-school friend Bridget after many years.  After re-connecting by e-mail, they finally met at a small cafe for lunch.  But the excitement soon wore off when Bridget started talking.  She showed little interest in Carman and dominated the conversation with a long, angry story about her failed marriage.  “I lost my appetite for the food and left the restaurant feeling 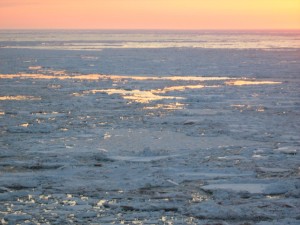 like I’d been poisoned”, Carman told me later.  Exploring her feelings further, she realized that underneath her disappointment she felt sad, frustrated and hurt.  The friend she knew from the past didn’t show up and in her place was an angry stranger.

Practicing Mindful Communication is a life-long path.  There’s no such thing as a meaningless conversation.  But what do we do when our buttons are being pushed?  When the communication door slams shut and our friend shows no interest in listening, what do we do on the other side of that door? One suggestion is not to do anything. ” When the light turns red, stop” is a reminder not to push ahead when communication breaks down.  Instead, practicing mindfulness enables us to rest in the present moment with an open mind and heart, simply feeling the sadness of the barrier.

This kind of sadness is like a stream in early winter. You can see the water flowing underneath a crust of ice.  Bridget’s anger was sadness frozen in aggressive storylines. Carman’s disappointment was a flowing sadness that kept her open as long as she didn’t get hooked by those stories. To do this, Carman had to let go of her expectation that lunch with her friend would be a two-way conversation.

We practice mindful communication in short moments like these when we’re in-between the flow and the freeze.  Success doesn’t mean Carman would suddenly have the power to open up a two-way conversation.  But success in this case means that she could feel the flow of her disappointment and her own sadness without freezing into a reactive story.  This enabled Carman to stay open for a little while longer to Bridget’s pain.  At the same time, she recognized how toxic Bridget’s storylines were. Seeing this clearly, she refrained from supporting them.

When the barrier is up, there isn’t much we can do.  But staying open to the wisdom of our open mind and tender heart can make that ‘not-doing’ a transformative kind of silence, an invitation to re-connect with the flow of communication that is always there beneath the ice.

For five weeks now my father has been in the hospital.  He’s frail and essentially paralyzed by Parkinson’s Disease, but he’s also a master of mindfulness.  And heartfulness,I might add.  So every hour I spend with him offers a new lesson.

I notice that Dad’s attention stays in the present moment and he tunes into the people who move in and out of the curtained tent in the ward he now calls home.  He’s genuinely interested in everyone.  He admires how the cleaners move like dancers in their daily routine.   His voice is a bare whisper, but he knows the names

of all the staff and finds something positive to say about each of them.  One day he met a young student nurse with a prominent scar on her chin and neck.  ” What is your name?” he whispered, as usual.  I’ll call her Anna.  Then, in that tone of the compassionate physician that I know so well he asked gently “Anna, how old were you when you were burned?”.  “I was eight” she replied.  Dad’s face was so tender and open. “That must have been a terrible experience” he said.  Then a pause as he gazed at her.  ” Anna, you have a beautiful face.”

Dad has spent a lifetime caring for other people and now that it’s time to receive, there’s a harvest of love and attention coming back to him.  Without effort he creates an environment that attracts openness, warmth and gentle curiosity.  Life in the present moment unfolds into new dimensions I can never predict.  All I need to do is to show up.

Mindful communication is more than a skill.  Like a key, it opens our heart, mind and sense perceptions to the magic of the present moment and the network of relationships that support us every moment of our life.